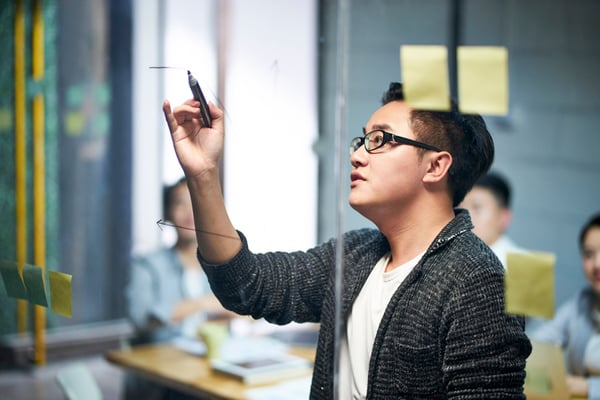 Are you highly organized? Do you find yourself paying strict attention to detail, perhaps more than your peers? If so, you might have an in-demand skill set—project management.

More and more organizations are realizing project management is essential. Consult with anyone who has ever embarked on a project without a project manager to learn why. Here are just a handful of reasons why the lack of a good project manager can quickly result in bad business:

And once everyone realizes what’s going on, bringing in a project manager midway through the process means an outsider cleaning up a giant mess. The project’s launch date will likely be rolled back multiple times, and cynicism will surround the eventual product.

Starting a project with a project manager can prevent these types of issues from ever coming up in the first place. So what do project managers look like, and how do you know if that’s you? According to 120VC, a leadership and change management training company, these are some key characteristics of a project manager:

Sound familiar? Let’s take a look at what a project manager does.

So what does this mean for you? With a certification highlighting your project management skills, you’ll get noticed by hiring managers. Having proved yourself in this space, you’ll get better responses to job applications, more job offers and opportunities, and better maneuverability once you land a job. With that come the basics: job security, a steady income, pride in your career, and more.

A great way to document and prove your abilities as a project manager is through Six Sigma courses and certification, which tests you on a set of techniques and tools for process improvement.

Introduced in 1980 by American engineer Bill Smith while he was working at Motorola, Six Sigma became central to the business strategy at General Electric by 1995 thanks to the company’s then-CEO, Jack Welch, championing the system. After GE’s success with Six Sigma, companies around the world adopted and still use the system today.

Basically, engaging in Six Sigma means striving for perfection, or the assurance that 99.99966 percent of products or services are delivered perfectly. Its initial application was in manufacturing—specifically, in working toward making parts absolutely free of defects. But over time, Six Sigma’s philosophical thrust came to apply to all aspects of management, including project management.

Professional organizations such as the American Society for Quality (ASQ), Institute of Industrial and Systems Engineers (IISE), and Chartered Quality Institute (CQI) offer Six Sigma courses, and it’s taught in dozens of colleges, but career training centers, such as New Horizons Career Development Solutions, offer a quicker way to get certified.

Taking tests can be nerve-wracking—but it doesn’t have to be that way. Here’s what to expect while you prepare for your Six Sigma certification test.

A good training program will thoroughly prepare you, and when you combine it with some self-study, you’ll be well set to redefine your career. So you’ll start with a training program, either through an association, a university, or New Horizons Career Development Solutions. You’ll follow up with copious amounts of self-study.

Six Sigma courses teach students to reduce waste and variation within any organization’s critical processes—which is any industry delivering products or services. With Six Sigma skills in tow, you’ll prove yourself to be an asset to organizations, helping them benefit from increased revenue and stakeholder satisfaction, not to mention lower costs as a result of reductions in product defects, overproduction, process wait times, inventory errors, and more.

Your final step toward achieving Lean Six Sigma Green Belt certification is taking the test, of course. The test is a combination of a multiple-choice exam and a performance-based test, or project, which most students complete within six months. For the Six Sigma project, you’ll measure the cost benefit that comes with improving processes that are currently creating substandard products or services. The goal of the project is to produce statistically significant improvements in order to create a virtually defect-free product or service. Finally, you’ll submit your project to an instructor for approval and grading.

The outlook for a career in project management is good, if not great. According to PMI, 1.5 million new project management jobs have been created yearly during the last decade. Why is the professional role growing so much? Well, as companies are beginning to adopt an agile development framework, they’re looking at project managers as the professionals to get them there. More broadly, tech companies and other big companies are looking to insulate themselves in a continually changing political landscape, the type of shift that spawns project manager jobs. Meanwhile, the expansion of the Internet of Things (IoT), smart buildings, and smart cities introduces much in the way of project management, both in building and maintaining such spaces and in handling the massive amount of data they produce.

And project managers are well paid, too. In the United States alone, Six Sigma-certified professionals can earn a yearly salary of $80,000 or more. If you’re ready to get started on your Six Sigma certification with New Horizons just click here.

© Copyright 2023 by KML Enterprises Career Development LLC. All rights reserved.
Non-Discrimination Policy: New Horizons Career Development Solutions is committed to providing a learning environment that is free of discrimination. Equal opportunity will be extended to all persons in all aspects of our Program. New Horizons Career Development Solutions will not discriminate against a student because of race, color, religion, sex (including pregnancy, childbirth, and related medical conditions, sex stereotyping, transgender status, and gender identity), national origin, ancestry, age, marital status, physical or mental disability, medical condition, political affiliation or belief. If a student believes they are being discriminated against, they should report the facts of the incident to the Instructor, the Education Advisor , or the Site Manager in writing (see Grievance Procedures in catalog). New Horizons Career Development Solutions is an Equal Opportunity Employer. Reasonable accommodations can be requested by those with disabilities or limited English.