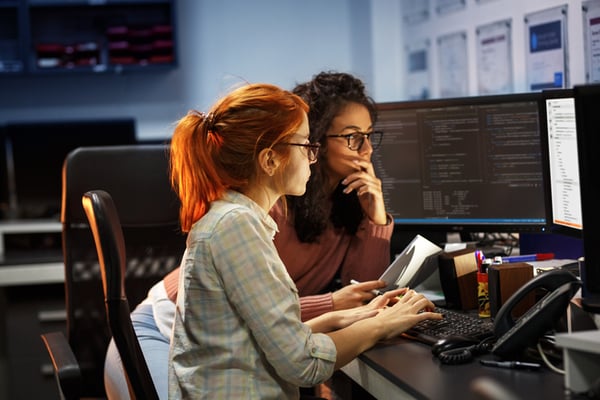 Editor's Note: This post was originally published September 2015 and has recently been updated and revised for accuracy and comprehensiveness.

In 2018, the IT industry has seen significant gains in female participation in developer positions, but more work remains to be done. A recent HackerRank study indicates that women under 25 are now 33% more likely to study computer science than those who were born before 1983. Newly emerging niches in software development are prime areas for growth for female developers, notably cloud development and DevOps. Read more about Cloud Development, DevOps, or continue reading an updated version of the original 2015 article below.

It's not much of a secret that the IT world is a bit of a boys club. This is even more true for software development and programming. A Bureau of Labor Statistics study in 2018 found that more than 81 percent of American software developers were male. That's not just a small majority; that's an enormous gender inequality problem.

But despite this extreme imbalance, more women are choosing programming careers. Although the entire industry is about 81 percent male, more than half of new junior developers and computer science graduates are women, according to CNET.

The recent HackerRank study revealed more hints at a narrowing gap between women and men in tech. According to the study, the gap between men and women over the age of 35 who started coding before age 16 has shrunk by 20 percentage points. That suggests this isn't just a fluke, but rather a trend of more women being comfortable with going into IT.

What are the hurdles and how should women overcome them?

Although this trend of more women going into software development is certainly good to see in terms of gender equality, there's still a long way to go. Women seem to be leaving business roles in the technology industry in droves, much more than their male counterparts. A Catalyst report states women working in tech-centered business roles are leaving the industry at a rate of 53 percent, compared to 31 percent for men.

So why are they quitting? The HackerRank study suggests women are still facing headwinds. It says women who are over the age of 35 are more than three times more likely to hold junior positions, compared to equally qualified men. This suggests there's still room for managers and tech leaders to improve when it comes to shrugging off bias.

That being said, there are greater numbers of options for women to earn more and get promoted to a position where they can become a role model within IT versus other fields, especially when they have IT certifications.

Business Insider says having some IT certifications can help an entry-level worker earn up to $16,000 more than their peers on an annual basis. And they can help women move into even more leadership positions within the tech world. New Horizons Career Development Solutions is a great place to find education ranging from basic computer training all the way to specific training like CompTIA certifications.